Over recent years, California has been facing increasingly deadly fires. Their historic destruction brought to the public's attention the broad use of inmate fire crews working statewide to protect communities. The over 3,000 inmate firefighters working in California have been an indispensable resource-- risking their lives alongside state, county, and city firefighter crews. It also highlighted the underlying injustices these hard-working crews face; in addition to only making dollars a day for their labor, these workers have been largely barred from entering the firefighting profession due to blanket licensure bans for those with prior convictions.

AB 2147 takes a first step to provide some recognition for the public service being provided by these crews through an expedited expungement process and opening the door to broader job opportunities. Previously, individuals with a felony conviction were required to go to court and change their initial plea to not guilty, complete their sentence and wait between 1-2 years -- including completion of parole or probation. These high bars kept former inmate firefighters from pursuing careers even if they had received extensive training, experience and demonstrated incredible public service while incarcerated.

CEO participant Victor Canales was released in 2019 before the law was changed. While not a direct beneficiary of the recent change, his story highlights the difficult path that inmate firefighters have to take to pursue a career in firefighting after release. While Victor is still working on his career path, his story offers inspiration for others. On September 21, 2020, Victor was interviewed by Christopher Watler, CEO’s Chief External Affairs Officer.


When did you join CEO?

I left prison after a 15-year sentence in 2019. My buddy went through CEO and referred me. CEO has done a lot for me. I felt like when I walked in there they grabbed my hand and let me know everything is going to be ok. We are going to guide you through the whole process. I felt like it was going to be Ok.

Describe how your transition has been going and what challenges you are dealing with?

I was adopted young and grew up in an amazing family in Rowland Heights. My family was loving and caring. I was in Boy Scouts and went to church every Sunday. It only takes one bad decision to ruin your life. I got kicked out of school for bringing a pocket knife to class and was placed in an alternative school. I started hanging out with the wrong people and that led to the crime that got me incarcerated.

I went away as a kid and came out a grown man. I was supposed to do 18 years but got out in 15 because I participated in the inmate firefighter training program. The hardest part for me is reconnecting with my family. We have been estranged because of my behavior. I have a 16-year-old son I have never met. Prison doesn’t really make you a man; it seals you up in a time capsule. My family doesn’t trust me yet; they don’t believe that I have changed so I am working to prove that to them.

I also got help through the Amity Foundation. They have been a second home for me. The support I have gotten from Amity and CEO have really helped my transition.

How did you get involved in the Firefighting program on the inside?

There is no greater job than being a firefighter. You do it because you have an opportunity to give back and do something positive everyday. As a Boy Scout you went outdoor and learned to do things with your hands. I liked that. When I started getting into trouble and was sent to Juvie at 17, I did a fire camp program. The foreman saw my potential and encouraged me to consider a career in firefighting. I liked it, but was too focused on having fun and chose a different path that led me to prison.

I was at the tail end of my prison term when I got connected to the inmate firefighter training program. It was tough. It is literally a firehouse in the prison staff by inmates and led by former corrections officers who have trained to become firefighter leaders. I rediscovered my passion for firefighting. I would stay in the bay all day studying and working towards my certifications. We made way less than firefighters on the outside, but got lots of training and experience.

We would respond to the same calls as regular firefighters and do the same work. I worked house fires, commercial fires and helped, provided CPR, and removed people from car accidents using the jaws of life while incarcerated. From the outside we looked just like any firefighting team with our own trucks, equipment and command. We had to meet the same requirements. We worked as a team and we were proud to be helping the community.

I didn't finish the inmate program on the inside because of some challenges with the certification process before my discharge. 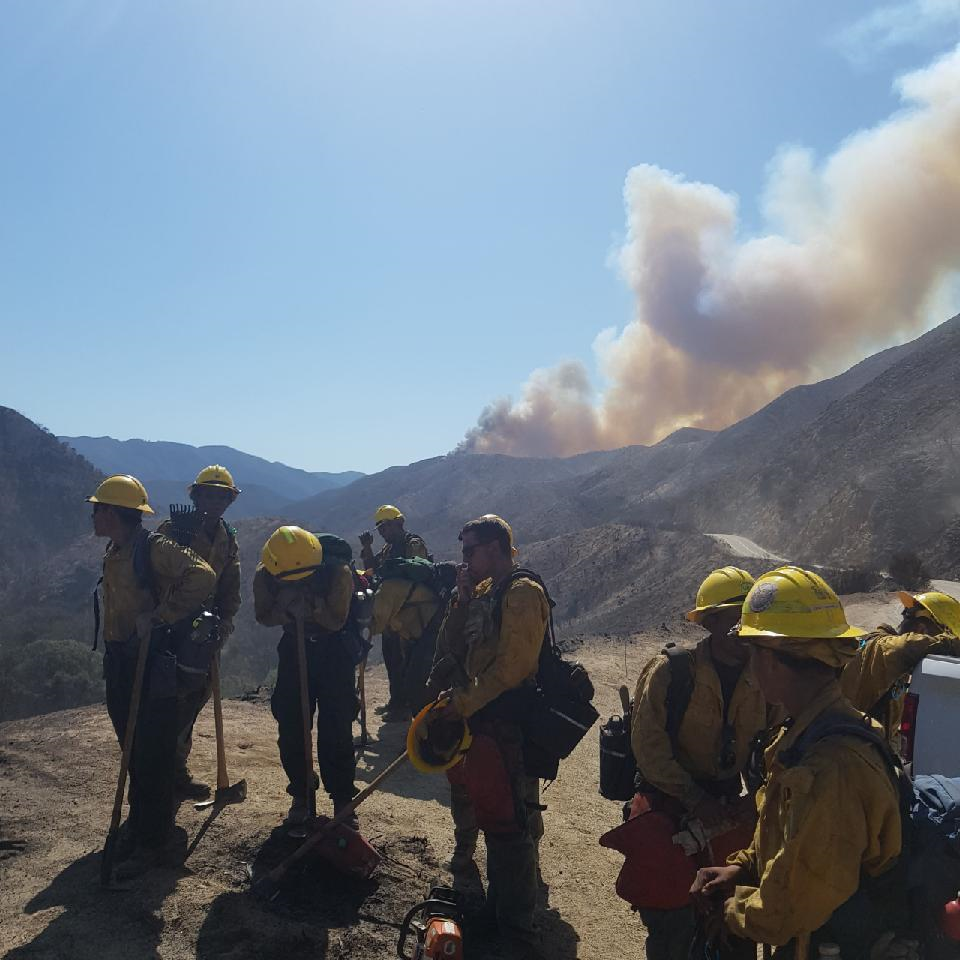 Describe the firefighting work you are doing now and how you got connected to this work?

It is really my CEO Job Coach, Terra Heinzel-Nelson, she was all positive. She worked hard to get me into the Forestry Service firefighter program. Initially, CEO got me a job with Goodwill. However, Terra knew I wanted to get into firefighting. Her co-workers Alexa Harris and Patricia Conklin shared an opportunity with the Forestry Service. I also got a lot of encouragement from Aaron Franklin who was a former inmate firefighter and now works for CEO. They never gave up on me and worked hard to connect me to my current job. Currently, I am a paid volunteer firefighter with the Forestry Service. It is an entry-level opportunity that I hope will lead to a full-time paid firefighter job with a state, county or a city department.

These days you are fighting historic fires that have been deadly. What is that work like on the ground?

At 36, I am the oldest member of my crew. All the other firefighters are in their twenties,some are college kids or low-waged workers hoping to get a shot at landing a good job as a firefighter. The program gets your feet wet. We are with other hotshots. Everytime we go out it is like an interview and you are being watched. You make a name for yourself, you will get job interviews. We don’t get benefits, but we do get paid.

Recently, They had to pull us out of a potentially dangerous situation. We were working to put out hot spots and the weather became a concern. Later in the day the air is hotter and there is less moisture which is when you get extreme fire behavior. Things were getting dangerous so they pulled us out. If we had become trapped we would have needed to deploy our shelters and wait for rescue. We had to hike out to a safe zone. I carry a gallon of water when I go out. It is critical to stay hydrated. Dehydration is a problem and can lead to IWI (incident within an incident) that can require emergency medical attention and rescue. The goal is for all of us to get home safely at the end of the day.

To do this work you have to be physically fit and able to work as a team. Listening is the most important thing, if you miss one detail things could get out of whack and endanger yourself and others.

What do you think about the recently passed AB2147 allowing certain prisoners who are on the front lines of wildfire containment to have their records expunged after serving their sentences?

I support this bill and am hoping it will help me. I am trying to get hired into a full-time firefighting job with benefits. I want to look into it and see if I can get my record expunged and off of parole early to qualify. My training and the fact that I am already doing this work well shows that I have what it takes; I just need an opportunity.

It is common knowledge that the inmate crews work harder than regular firefighters. It is important to give them an opportunity to become firefighters and put their training to use helping the community.

What advice do you have to other people with a criminal conviction who might want to become a firefighter?

One thing I have learned, you can waste a lot of things in life and get it back, but time is not something you can get back. If you find something passionate go for it, don’t waste that time. It is important to change the laws to provide opportunities for people who go through the inmate training and prove themselves to be rewarded with a job when they get out.

I also hope that more young people can be given a chance to learn about becoming a firefighter before they get into trouble. There should be more opportunities for youth in high schools to learn about a firefighting career.

This is America. If you want it you can get it. Never give up. I want it and I am going for it. Hard work will get you there. Persistence will get you there. I made a mistake in my life as a young man. I own that and am paying my debt to society. When people are standoffish and skeptical of me, I understand. I want to have a family again and be normal again. I also want to pay it forward and help others in my situation and to help young people not to make the mistakes I did.

All I ask is that you don’t close the door on me or others in my situation. Give us a chance to prove ourselves.

Your contribution supports thousands of individuals in building career capital and a pathway to financial stability. Donate today and invest in change that works.