What happens if the state gives direct cash assistance—$2,750 spread out over three payments to released prisoners? This is what the state of California is trying out. A law now allows prosecutors to recommend incarcerated people for release if that person received a particularly excessive sentence, or has shown that ...

Prisoners will get a $2,750 check when they leave prison

Gate money: The concept of “gate money” — a little bit of cash upon leaving prison — isn’t new. In fact, a lot of states send prisoners home with some funds in their pocket, generally at least enough for bus fare and a meal. But for most, the cash barely ...

Commentary by Sam Schaeffer and Ivonne Garcia: Navigating a return from prison or jail is hard even at the best of times. But during a pandemic it can be daunting. Scott, who was released from a California prison this year after serving six and a half years of a 10-year ...

In California, a law allows prosecutors to recommend incarcerated people for release if that person received a particularly excessive sentence, or has shown that they’ve rehabilitated themselves while in prison. Now, 50 people who are released under that law will be part of a test: What happens if they also ...

Employers across California are asking, “Where can we find workers?” The truth is that many hundreds of thousands of Californians are locked out of opportunity. And it doesn’t have to be that way. Many of our state’s most pressing economic challenges are the consequence of inaction. In this case, more ...

San Diego ‘Gets It Done’ — 7,000 Tons of Trash Removed from Public Spaces 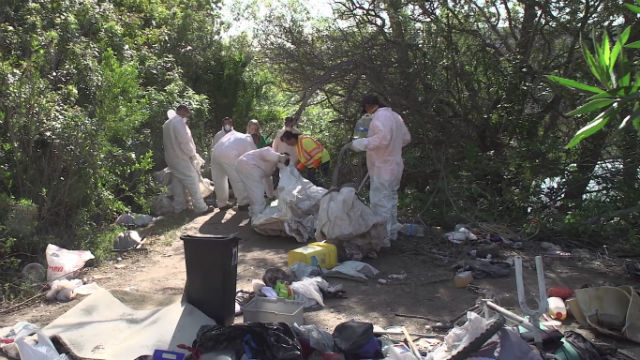 Three years into a citywide effort to keep San Diego clean and safe, Mayor Kevin Faulconer brought together partners of the city’s Clean SD program Tuesday to highlight the progress in removing more than 7,000 tons of trash, debris and waste from public spaces across the city.

One local organization is giving jobs to hundreds of people who were formerly incarcerated. Elizabeth Alvarez was live with Robert Smith from the Center for Employment Opportunities to talk about how the organization helps former inmates get back on their feet after prison.

SAN BERNARDINO – Inside an inconspicuous building on South E Street, Michael Wahome, Larry Bethea, Armando Lopez and a team of others are attempting to lower recidivism statistics one parolee, one probationer, one person at a time. Those at the Center for Employment Opportunities know what they’re up against: A ...